For more information about this vessel, please contact Bill Stamp.
We look forward to working with you! 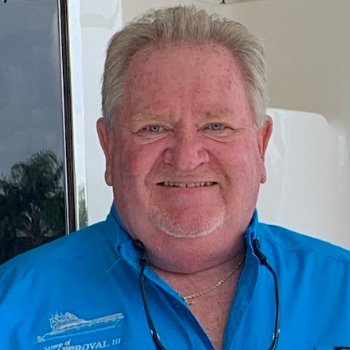 Bill Stamp has been into power boating since he was 16 years old, navigating the waters of the Great Lakes from Toronto, Ontario, Canada. Born in Canada, now with dual citizenship, he has called Florida home for the past 25 years – more than 15 of those in Punta Gorda. Active in area boating, he helped spearhead the Buckley Pass project.

Living in Canada, Bill’s career gained him extensive knowledge in Caterpillar, Cummins and Detroit Diesel engines. He received his pilot’s license at age 30 and has owned several Cessna airplanes, including float planes. Married for 41 years to his childhood sweetheart, he and Kendra have 2 daughters that live in Punta Gorda along with 2 grandchildren.

Throughout his boating career, Bill has owned sport fishing boats, from Bertram’s to Vikings. When they lived on the east coast of Florida, Bill & his family traveled extensively throughout the Abacos and Bahamas. Here in Punta Gorda, he & his wife own a 56’ Sea Ray and a 33’ Grady White, and enjoy cruising Florida’s west coast.

Bill's love of boats and boating is a passion that he will put to good use for YOU – helping you find you the best deal for the best boat that fits your needs for now and in the years to come.