For more information about this vessel, please contact Elizabeth Swain.
We look forward to working with you! 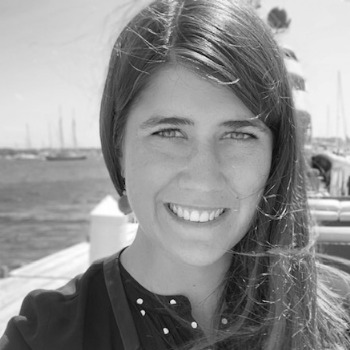 Growing up in Harvard, Massachusetts, Liz’s first boating experience was sailing a Herreshoff 12 ½ out of Woods Hole, MA. She's been hooked on the ocean ever since. Liz is a graduate of the University of Rhode Island and holds a Bachelor of Science degree in marine affairs with a minor in environmental and natural resource economics. She was the president of the URI Sailing Club where she managed the school's fleet as well as the sailing facility itself. After college, she moved to Newport, RI where she raced 12 Meters and crewed for offshore deliveries. She then worked for Sailors for the Sea in Newport, an ocean conservation organization that engages, educates and activates the sailing and boating community toward restoring ocean health.

After this, she took a break from yachting and moved to Cordova, Alaska, a small and progressive fishing town southeast of Anchorage. There she worked in administration for the Prince William Sound Science Center where her responsibilities included event/conference planning, website management, field and lab studies, facilities management, bookkeeping and accounts payable. Additionally, Liz served as Secretary of the Sheridan Alpine Association for the Board of Directors and served on the Bluegrass Music Camp Board of Directors. During her time in Alaska, she enjoyed subsistence salmon fishing, hiking, hunting, skiing, glacier ice skating, and brewing beer with wild ingredients.

She then moved aboard a 38-foot (11.5m) sailboat and incorporated a rigging and electrical business, cruising and servicing sailboats and powerboats in Florida, The Bahamas, the Caribbean, and New England. Moving with the seasons brought Liz back up to Rhode Island where she entered the yacht brokerage world. She worked with Sparkman and Stephens and later came aboard with Northrop and Johnson in June of 2019. She is delighted to be a part of such a sophisticated and professional team of brokers worldwide with N&J.