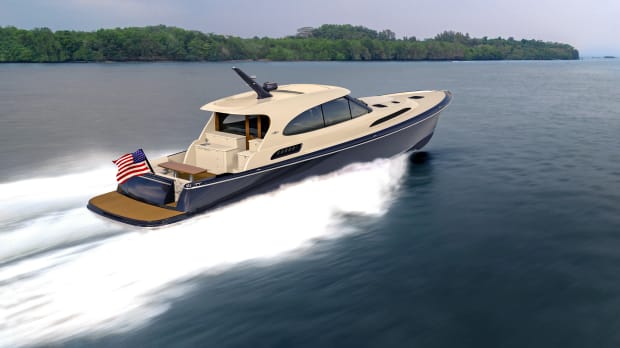 Palm Beach Motor Yachts recently announced that its latest model, the GT60, will make its debut at the 2020 Miami Yacht Show in February and, according to the company, will also be one of the fastest and most fuel-efficient motoryachts in the world.

The GT60 will feature twin Volvo Penta IPS 1350 engines, which Palm Beach claims will provide a cruising range of 400 nautical miles at 40 knots. Top speed is expected to be in the mid-40-knot range. Palm Beach says its hull design and the use of weight-saving carbon fiber and closed-cell foam core make the combination of speed and lower fuel consumption possible.

Fuel burn numbers were not provided, but Grand Banks and Palm Beach Motor Yachts CEO Mark Richards said, “To achieve speeds of this nature with so little horsepower is truly remarkable. To be able to cruise long distances at these speeds, using minimum fuel, opens up a whole new set of destinations.”

Palm Beach launched the GT series of yachts with the GT50 earlier this year and says a 70-footer is also planned.